Anissa is traumatized by the most brutal conflict of the 21st Century: the Syrian Civil War. In 2012, Islamists in Homs terrorize a Syrian-Christian community and destroy everything that a young woman holds dear. Narrowly escaping death, Anissa restarts her devastated life as a college student in New York City. She is bewildered and lost, but hopeful for a better life in a new land. Anissa is soon drawn to two powerful individuals: Michael Kassab, the Syrian-American leader working to found the first Mideast Christian ...

It starts as a classic case of boy-meets-girl, boy-holds-girl-up-at-knife-point, boy-and-girl-fall-in-love. But what should be a honeymoon-like jaunt through the ruins of pre-Columbian Mexico turns into an action-packed chase through moonlit forests and across crumbling pyramids.

Bryn Reyes is a real-life sleeping beauty. Afflicted with Klein-Levin Syndrome, she suffers episodes of prolonged sleep that steal weeks, and sometimes even months, from her life. But unlike most KLS patients, she doesn’t spend each episode in a catatonic state or wake up with no recollection of the time she’s missed. Instead, Bryn spends half her life in an alternate reality made up of her memories. For Bryn, the past is a place, until one day a boy she’s never met before washes up on the illusory beach of her dreams with no memory of who he is.

Mitch Albom creates his most unforgettable fictional character—Frankie Presto, the greatest guitarist to ever walk the earth—in this magical novel about the bands we join in life and the power of talent to change our lives. In his most stunning novel yet, the voice of Music narrates the tale of its most beloved disciple, young Frankie Presto, a war orphan raised by a blind music teacher in a small Spanish town. At nine years old, Frankie is sent to America in the bottom of a boat. His only possession is an old guitar and six ...

A Taste for Magic, book two of the Spellbound trilogy, is a darker tale of vengeance as it continues to follow Sienna and Will, but also delves deep into the story of Shard, Oletta and book of white magic. Book Two tells the story of a young boy, who suffers a personal tragedy then finds himself immersed in a world of black magic. 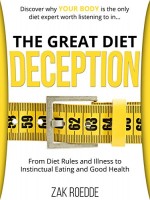 "Restrict 'evil' foods such as sugar, salt, saturated fat, grains, meat, and dairy." "Drink fluids beyond thirst, restrict calories below hunger levels, and exercise daily" "Eat unpalatable health foods like raw vegetables, chia seeds, and kale smoothies." Most of us have heard and used at least some of this advice from health and diet 'experts' to achieve our health, energy, and weight loss goals. But would you...

Beloved #1 New York Times bestselling author Colleen Hoover returns with an unforgettable love story between a writer and his unexpected muse. Fallon meets Ben, an aspiring novelist, the day before her scheduled cross-country move. Their untimely attraction leads them to spend Fallon’s last day in L.A. together, and her eventful life becomes the creative inspiration Ben has always sought for his novel. Over time and amidst the various relationships and tribulations of their own separate lives, they continue to meet on the same date ...

Infertility Stinks! A 31 Day Devotional details the very personal journey of hope and faith through seven years of infertility woes.

All Daniel Waterstone ever wanted to do was write the great American novel and change the landscape of modern literature forever. He has two literary books in print but no one's buying. His agent won't even accept his latest masterpiece which he poured his soul into: apparently, it's not commercial enough.

A secret chamber. A mysterious shipwreck. A murder in the desolate salt marshes. A seemingly straightforward private case turns out to be much more complicated-and sinister-than Special Agent A.X.L. Pendergast ever could have anticipated. Pendergast, together with his ward Constance Greene, travels to the quaint seaside village of Exmouth, Massachusetts, to investigate the theft of a priceless wine collection. But inside the wine cellar, they find something considerably more disturbing: a bricked-up niche that once held a crumbling skeleton. Pendergast and Constance soon learn that ...

Are you a single woman over 35? Scared out of your mind you'll be alone forever? Dating memoir set in 1990s L.A., amid race riots, a romance that shouldn't have been. Disconnected is Modern History, and the Coming of Age of women, for women.

Women. Infected blood. Rotting corpses. Welcome to the world of Katrine Baten, aka Midnight. She is one of the oldest existing Vampyirs and only surrounds herself with eye candy.

A master storyteller’s vision reawakens us to the human experience in this diverse, haunting, and unexpectedly humorous new collection of short fiction from Simon Van Booy—his first since Love Begins in Winter, winner of the Frank O’Connor International Short Story Award.

Set on the sun-kissed sands and deep blue waters of Florida's Gold Coast. The rich tropical background is home to a team of recovery specialists living on the edge of society and the fringe of our digital world. The team has no names, no history and hide behind a string of corporate fronts. They race against the clock and bump up against their own maverick personalities to recover $65 million and clear their client of murder before the police catch up with all of them.